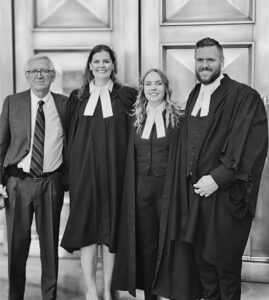 Our practice covers criminal charges and trials in the areas of drug law, weapons offenses, and serious violent offenses, including assault, aggravated assault, and homicide cases.

We also defend clients charged with a broad range of other criminal offences, including theft and property-related offences, firearms offences, and driving offences, such as dangerous and impaired driving.

As part of these proceedings, a particular area of focus is on advancing complex constitutional issues, to assert rights under the Canadian Charter of Rights and Freedoms. This includes applications to exclude evidence or have charges dismissed on the basis of violations of constitutional rights, such as rights to be free from unreasonable search and seizure.

Our appellate practice includes criminal conviction and sentencing appeals of both summary and indictable matters.  Our lawyers have represented clients appealing from relatively minor summary offences which have incurred a disproportionate effect on our clients.

We have also represented clients in the appeal of murder and other serious violent assault offences, drug trafficking, home invasions, and weapons convictions.

Our office is situated on Treaty 7 and Métis Nation of Alberta Region 3 Lands.

In the spirit of reconciliation, we acknowledge that we live, work and play on the traditional territories of the Blackfoot Confederacy (Siksika, Kainai, Piikani), the Tsuut’ina, the Îyâxe Nakoda Nations, the Métis Nation (Region 3), and all people who make their homes in the Treaty 7 region of Southern Alberta.
Criminal Defence Lawyer – Criminal Appeals Lawyer – Criminal Defence and Criminal Appeals Law